From Sting to Spin, 2nd edition is out! 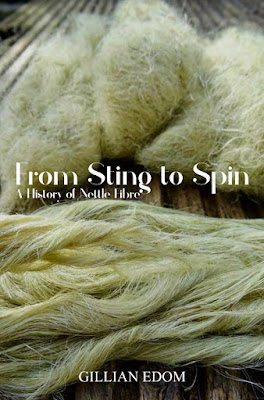 The concept of using the common stinging nettle to make cloth comes from fairy tales and folklore, archaeology, historical fact and anecdotal evidence. This book brings together as much evidence as possible in order to show how nettle fibre was used in many countries around the world from the earliest times up until the Second World War. It also attempts to unravel the confusion that has arisen from the fact that, world wide, there are many types of ‘nettle’ that are used to produce fibre.

The completion of this revised edition was inspired by the new wave of nettle fibre enthusiasts who have been enabled to communicate and share their knowledge and interest in using nettle fibre to make cloth through the medium of social media. It was also an opportunity to correct several minor errors and add some extra material that has emerged during the last few years.

It goes without saying that the new cover is significantly enhanced by Allan Brown’s beautiful picture of his own extracted nettle fibre.
Home
Subscribe to: Posts (Atom)


Gillian researched nettles, especially Urtica dioica (i.e. European Stinging Nettles), extensively for years and carried out a postgraduate degree studying nettle fibre extraction at De Montfort University. Her knowledge of nettles includes their biology, botany, folklore and uses, with a special interest in the history of nettle fibre use.